Tom Burwell is a solid man with a big heart. Much like his German Shepherd, Mojo, his appearances contrast his kind and caring personality.

Originally from Idaho, Tom wanted to work for a start up. He served several years on the customer service and technical support for big Silicone Valley companies like Dell, Eat24 (who were acquired by Yelp), and Instacart.

He said his favorite problems to solve are the ones where, “we have a nickel and need to solve a $20 problem.” 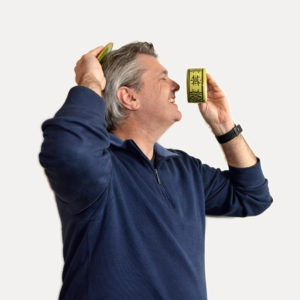 After many years in the customer service world, Tom explains that he views customer service as the face of the company. Tom was drawn to GlobeIn because of his desire to work for a company with a mission. He quotes his mother, a strong, successful woman herself, and his experiences traveling as his inspiration for wanting to work in fair trade.

“I saw firsthand how poorly women are treated in other countries,” explained Tom. “It didn’t sit right with me and I wanted to be able to affect change.”

The father of three daughters, Tom is a fan of GlobeIn’s model of purchasing products as a means to empowering women.

“It’s not a hand out,” states Tom. “We’re paying you for something you’re doing and giving you a better life and exposing your work to people around the world.”

“It’s a quirky, unique product you’d never really think of,” explains Tom. “I’m a Bear Grylls fan and I remember when he was in Africa. I was a little taken aback when I first saw it, but I read about it and the history and I liked it.”

Looking ahead, Tom wants to continue using customer feedback to help grow and better GlobeIn. He sees his role as being the voice of the company. But, most importantly, taking all the customer feedback and doing something with it.

Tom’s favorite part of interacting with customers is that it’s not always bad feedback he’s hearing.

“People love the mission and they like how responsive we are to their concerns,” says Tom.

Tom and the whole team at GlobeIn look forward to hearing from you, bad or good.