A Closer Look at GlobeIn: Behind The Scenes - GlobeIn Blog
Skip to content

Fair Trade is sometimes one of those words that is thrown around like glitter, giving people a “good feeling” about what they’re purchasing. Yet, making the claim to be Fair Trade and actually living it out in your company are two very different things. To really understand the difference, we as consumers must do our part by diligently researching which companies to invest in. We must expect transparency and ask questions along the way. At GlobeIn, that is exactly what the co-founders seek to do in marketing the company as, not only Fair Trade, but much more for their artisans and customers.

Last week, I had the privilege to speak with Liza, one of the co-founders of GlobeIn, to discuss some of the questions customers have asked about GlobeIn. The GlobeIn Facebook community, affectionately called “mavens,” are passionate about understanding where their items are produced and how they as customers will make an impact in the world by using the power of their dollar to support GlobeIn. Below, Liza’s answers to some commonly asked questions regarding artisans, products, and the future of the company.

Liza explained that the very first artisans GlobeIn began building relationships with were the artisans in Oaxaca, Mexico. These artisans are the creators of the palm leaf baskets that come in just about every curated box subscribers receive each month! As GlobeIn continuously traveled to Oaxaca, they built deep relationships with the individual artisans, paving the way to a company centered on artisans at a more personal level.

Liza also explained the importance of joining the Fair Trade Federation, which reaches out to companies that want to be Fair Trade and sets standards regarding fair pay for artisans. Liza and other employees travel to various Fair Trade shows for inspiration, and then consult with artisans they know, suggesting ideas to use similar designs or new textiles. As the artisan groups’ business grows and reaches production capacity, GlobeIn looks for more artisans and groups to work with in order to satisfy their growing customer base.

“It is all about the relationships,” Liza stressed, thus preference is always given to the artisans they are currently working with before they reach out to new groups. In Mexico and Morocco, where many products are made, GlobeIn has managers in the country to work directly and consistently with the artisan groups. Liza and other GlobeIn employees have even traveled to meet artisans themselves! Most recently, Liza and her team took a trip to India to meet with current artisans to assess their skills, propose new ideas, and meet new groups. 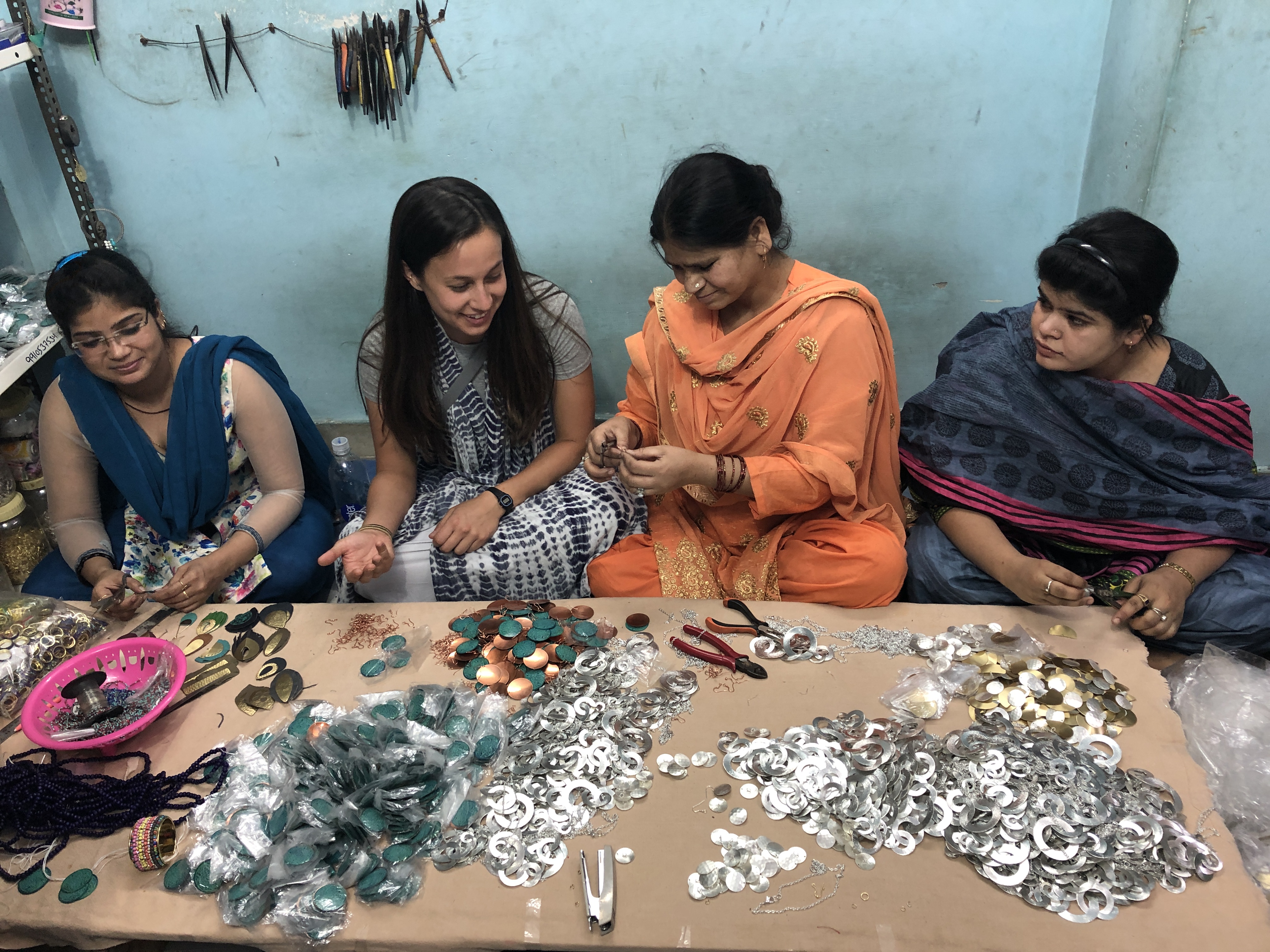 Hiring new GlobeIn artisans is an important aspect of the growing company, yet can raise certain issues. While GlobeIn wants to empower as many artisans as possible and ensure fair wages for women and men, there must also be standards for the products. As a result, GlobeIn will ask for a small batch of items when consulting with new artisan groups. Liza explains this allows them to test out “both quality and deadline issues.”

As the number of GlobeIn subscribers grows, the quantity of products in each monthly-themed box also grows. To give a new artisan group such a large production demand would be risky. Instead, smaller quantities can be sold online in the shop and tested out. This is why there are sometimes only a limited number of certain products. Liza emphasizes how GlobeIn wants to be both consistent and transparent in their growth. The goal is not to hire an artisan group for a single job, but to keep them in contract and growing in steady business.

To ensure all orders are fulfilled, GlobeIn must work well ahead of itself to give artisans enough time to create their products and have them delivered.

“We are already working on orders well into 2020,” Liza notes. For example, an order of 10,000 units of a product from India takes 5-6 months to deliver. The picnic baskets, part of June’s themed box “Picnic” were ordered in January of this year. Most of the baskets came on time for the June box, but as this was a new design for the artisans, and some issues with customs, some units were delayed.

But that’s when you learn to realize that these items are made by “real people, not robots,” Liza explains. In order to get the baskets to the United States, GlobeIn works with partners onsite in Ghana. These partners collect boxes of baskets, and put them on a bus that transports them to a shipping agent. The shipping agents then fly them over to the United States, where they are delivered to the processing facility and separated for each themed box. 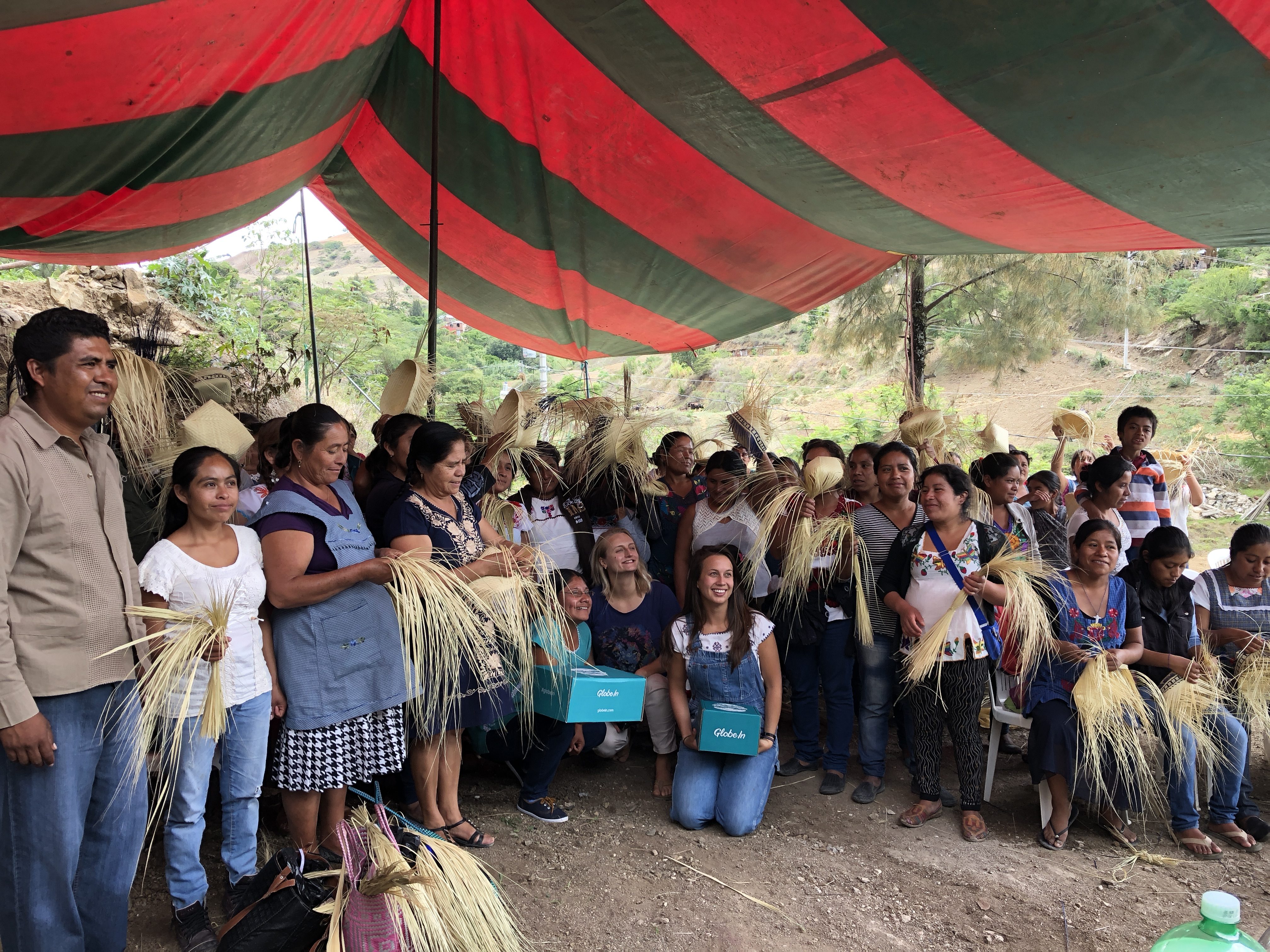 Process behind the products

Liza shared a story with me about her time in Nepal, looking at treeless paper journals. While to the consumer it seems like a simple notebook, there have been many hands that have touched it along the way and the process is far from simple. This paper is from Katmandu, and is called lokta paper. The paper is made from a plant that is on a mountain. In order to access the plant, workers travel on mules or walk and carry the plant back down the mountain on their backs. The plants are turned into a raw paper that is distributed to different artisan groups. One group is a family that specializes in screen-printing, another family does stitching, and another completes any drawing or coloring to decorate the journal. 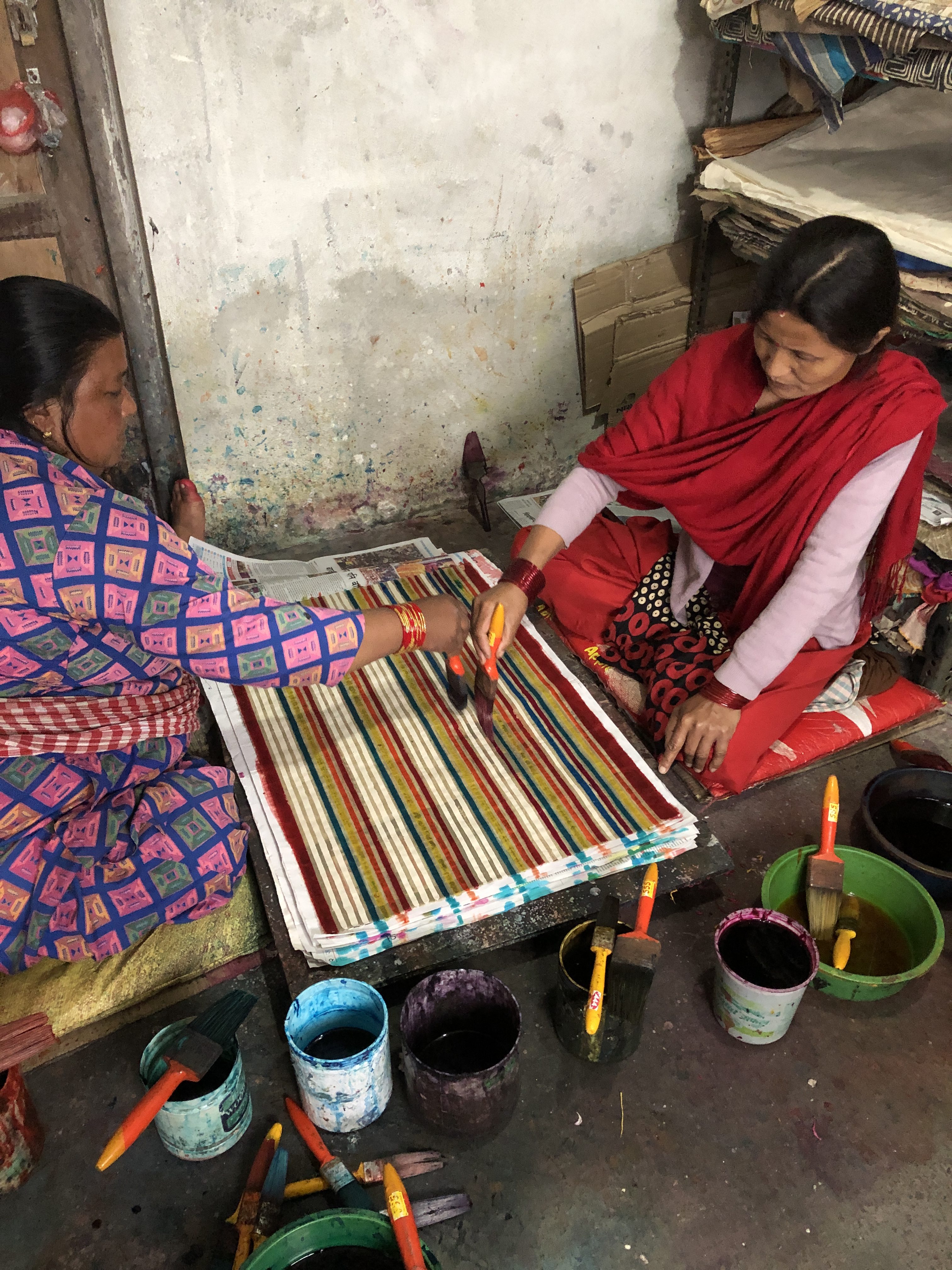 Liza recalls that, in India, she also saw steel knives and silverware that reminded her how items sometimes seem common, but when you learn how many people it takes to make them, it makes the items feel far less ordinary.

When asked about other popular GlobeIn products, Liza gave these statistics: the Bolga baskets take a week to make, the palm leaf baskets take about three hours, and the ever-popular Malika mugs take about 45 minutes each to mould and paint.

Goals and the future of GlobeIn

GlobeIn continues to work on being transparent by printing the GlobeIn magazine, which discusses the company’s mission and production process as well as how Fair Trade differs from regular retail, and includes their impact report.

When we asked Liza what she wishes Mavens and fellow Fair Trade customers knew, Liza was quick with a response. She firmly believes that we are “fighting poverty through Fair Trade and need to redefine capitalism.” Knowing where your items come from, the people that made your things, and the environmental impact you have with your purchases are crucial in changing the narrative of consumerism. While GlobeIn does want customers, Liza points out that it is far more important to think about your purchase and if you really need the item. She envisions customers creating homes with beautiful and ethical products, with GlobeIn being a “one-stop-shop” for all things ethical and Fair Trade!

I think I can confidently say that Liza’s vision of GlobeIn customers’ homes is shared among the Mavens. And while the products the artisans make are beautiful and unique, we can feel good knowing the term “Fair Trade” is not just glitter for GlobeIn!

in Virginia with her husband and four children, Laura enjoys writing and is an avid reader, as well as one who tries to raise as much awareness as possible about ethical brands and causes, while building community with those who are of the same mind. She thoroughly believes deep conversations happen around a dining room table, especially with coffee and desserts!