Rebuilding Haiti & Getting It Right - GlobeIn Blog
Skip to content

This post was originally published on WhyDev, written by GlobeIn Co-Founder, Liza Moiseeva, as part of the GlobeIn For Haiti campaign.

Haiti is the poorest nation in the Western Hemisphere. When the country was hit by the devastating earthquake in 2010 the situation went from bad to dire. Estimated death tolls quickly rose to 230,000. The whole world came together to help Haiti, ultimately raising $9 billion in aid relief… Fast-forward to 2016 and thousands of Haitians still live in temporary tin-roof shacks built as temporary housing after the earthquake. How did this happen? And, most importantly, how can we prevent this from happening again?

Six years ago, as a college senior, I raised $500 with my student organization for American Red Cross Haiti Relief. I have been closely watching Haiti’s progress ever since, but unfortunately there hasn’t been much to see. To the international development world, Haiti became the ultimate definition of “bad aid”, of why “good intentions are not enough”. For me, Haiti became the reason why I started seeking out sustainable solutions to our society’s most pressing problems, why I choose social businesses over nonprofits, empowerment over charity. In many ways, Haiti defined my career. That’s why I will never stop trying to help this tiny island nation to rebuild and prosper. Below are 8 best practices of sustainable aid with specific examples for Haiti.

8 DOS AND DON’TS OF GIVING BACK

1) If you want to help a specific country or region or support relief efforts after a natural disaster give money to established local organiZations.

If you prefer to give to organizations that you are familiar with, donate to established organizations, specializing in relief efforts: American Red Cross, Oxfam, CARE, Doctors Without Borders. Be aware that nonprofits even as experienced as the Red Cross just might fail you:

“NPR and ProPublica went in search of the nearly $500 million [donated to American Red Cross Haiti relief] and found a string of poorly managed projects, questionable spending and dubious claims of success, according to a review of hundreds of pages of the charity’s internal documents and emails, as well as interviews with a dozen current and former officials.” – Laura Sullivan for NPR, 2015

2) Do NOT send in-kind donations like your old t-shirts or even food.

More likely than not, the affected region is capable of growing its own food and has a developed local apparel industry. Inadvertently, your good intentions could destroy local economies. In-kind gifts also waste money on shipping them and the resources of volunteers that have to sort through them.

If you want to give food (I really don’t know why you would, but…) donate to the Necessity Fund created by Haiti Design Co.

This fund addresses the basic needs that people have to survive such as food, clean water, clothing, toiletries, and medical needs. All of these items are purchased locally, most in Port-Au-Prince, supporting not only the people affected by Hurricane Matthew, but also lifting up the Haitian economy.

If you are highly skilled and there is a call for volunteers by local communities and relief organizations then it is fine. Otherwise, you are doing more harm than good. In other words: unless you are Kate Winslet in Contagion, stay home (she was a Center for Disease doctor).

Preferably an untied donation so that organizations can use the money for other things, like future disaster relief efforts and long-term work.

5) If you want to evaluate and compare different charities, use charity watchdogs.

Some examples are Charity Navigator, Charity Watch or GiveWell.

6) Don’t look at an organization’s overhead costs – they tell you nothing about a charity.

It costs money to employ people, attract top talent, and obtain supplies so they can do their job. Look for proven impact and track record. Don’t get fooled by opaque marketing tactics (here is an excellent TED talk by Dan Pallotta on this topic).

7) DO purchase fair trade products that give local makers access to the global marketplace.

Fair trade (certified or not) tackles poverty through job creation.

Here is a handy list of artisan organizations in Haiti (put together by Haiti Design Co.) and here you can shop the GlobeIn store, featuring artisan-made products from 40+ countries.

8) Most importantly, DO support solutions, charities and social businesses that strive to prevent disasters and/or provide long-term solutions to social problems.

Case in point: New Story (a small but innovative nonprofit) has already built 211 homes in Haiti. They all survived the hurricane completely and protected over 1,000 people. Most importantly, every house that New Story builds is made by locals for locals. This is an example of a sustainable long-term solution to the housing crisis in the country: if more people in Haiti had access to sustainable houses, then many lives could have been saved, less people would have been left without food and shelter (after Hurricane Matthew it’s 60,000), and the cholera outbreak could have been avoided.

I am happy to announce that GlobeIn is partnering with New Story to build a house for one family in Jeremie, Haiti through the GlobeIn for Haiti campaign. 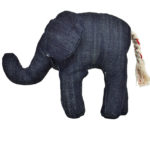 You can also purchase Elsa the Elephant from Haiti Design Co-Op this holiday season. Elsa helps provide jobs in Haiti and 100% of your donation will go towards New Story Charity’s GlobeIn For Haiti campaign. Read more about Elsa and how she is helping rebuild Haiti, one fair trade purchase at a time.

I hope this little post inspires you to do good – sustainably.