It was the fall of 2015. While visiting a friend in Portland, ME, a brightly colored fish patterned plate on Commercial Street caught my attention. There was an instant spark of recognition. I ran into the store, wanting to check who had crafted the piece.

I turned the plate upside down to find the origin. And there, in black print, was a name I knew so well – Le Souk Ceramique.

While writing this piece for GlobeIn in 2015, I read that Le Souk Ceramique’s pieces were unique and that patterns were copyrighted. I have slowly started to realize just how specially crafted these ceramics are. My first clue was spotting the Aqua Fish ceramics that morning in Portland. The second was when GlobeIn started carrying Le Souk’s Malika print exclusively.

Doug Littrel is the Sales Representative of Le Souk Ceramique and Le Souk Olivique. He lived in North Africa working for the State Department through the 1990s when he decided to pursue a different career path.

In 1997, Doug Littrel befriended Lotfi Zin. Lotfi, a solo ceramic artisan, was then working out of his garage. The two met when Littrel was walking Nabeul’s backstreets and happened upon Lotfi’s garage filled with beautiful ceramics.

“Our friendship grew out of hanging out in his garage while he painted and we drank tea and coffee,” describes Littrel, recalling those first days. “He’d paint these beautiful pieces and had no market at all.”

Littrel wanted to find a way to help Lotfi. Together, they began Le Souk Ceramique, hiring Lotfi’s friends and family members as their first employees.

“Fair trade didn’t exist as a term back then,” explains Littrel. “It wasn’t fair trade as a conscious intention, but we just weren’t going to exploit anyone.”

To start, Littrel helped Lotfi create different shapes and designs and acquire food safe glazes. He eventually moved to Seattle, Washington to distribute Le Souk’s ceramics in the US.

Lotfi has since passed away, but his dream and the company he built lives on. 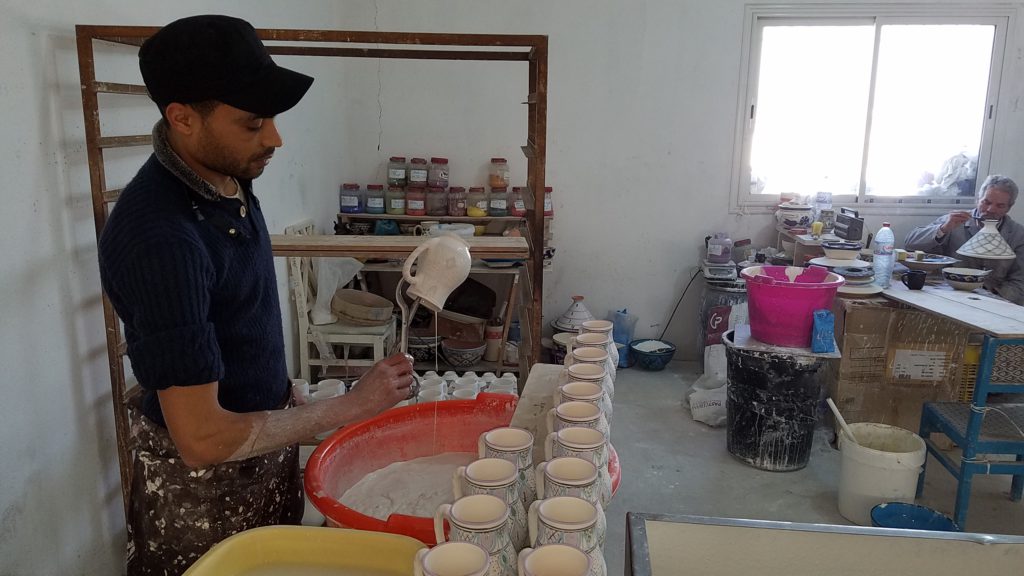 LIVEABLE WAGES IN A TIME OF INSTABILITY

“Tunisia has an enormous employment problem,” said Littrel, describing that the majority of Tunisian business is operated off the books.

Employers are required to pay the Tunisian version of health care and family leave, retirement, and an extra month of salary to seasoned employees, known as titulaire. It equals an additional 37 percent above baseline wages. Because of these expensive employment costs, many companies do not declare their employees. This leaves workers at risk of losing their jobs when a company wants to hire someone for lower pay. It also means employees do not have benefits in case of illness, injury, or inability to work.

Littrel estimates that the TND 7-9,000 a year salary each Le Souk employee receives is the equivalent of US$60-65,000 with benefits and bonuses. This allows most employees to afford a home, send their kids to college, and help out extended family members. For the 58 employees at Le Souk Ceramique and Olivique, this translate to a stable and comfortable livelihood earned through keeping this familial craft alive.

At Le Souk, employees work together to create completely hand-painted ceramics that are sold all over the world. As many as 8 employees work on a single piece, from throwing the bisque to firing the pieces in the kiln and painting the outlines.

As part of their day, employees take regular breaks during their 8-9 hour work day. Lunches often include meat, a rare and expensive comodity in Tunisia.

“We’re paying a livable wage in a high unemployment situation,” says Littrel. “Employees are able to help out extended family members. Everyone has a family member who has been laid off in agriculture or tourism.”

The positive work environment and close family culture at Le Souk means that employees enjoy coming to work. Ahmed Billi has been with Le Souk since the company’s inception and is old enough to retire. However, he loves hanging out and teaching younger employees how to make ceramics. So, he continues to come to work everyday, passing along knowledge of his craft. 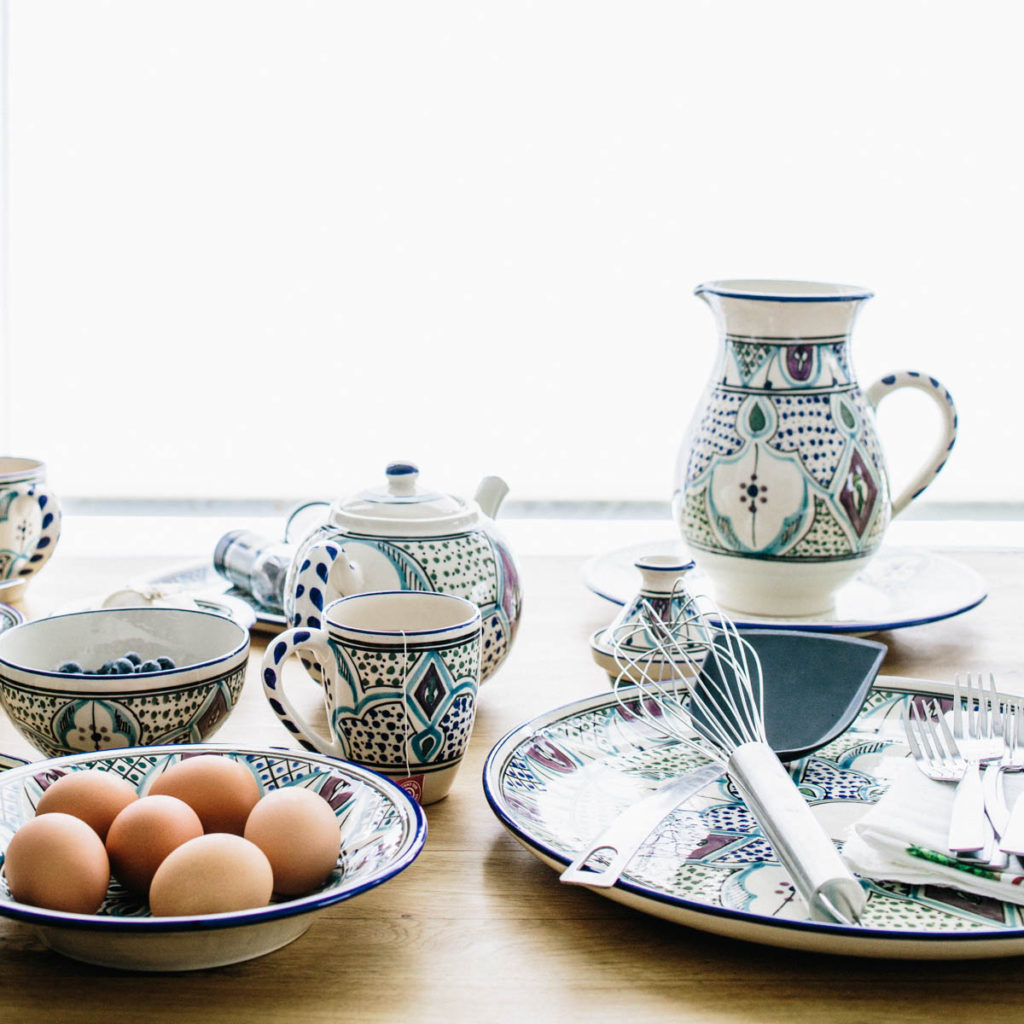 After two years of working with GlobeIn, the company is now the purchaser of 15 percent of Le Souk Ceramique’s daily production. Every 1 in 6 workers at Le Souk are shaping, painting, and finishing products as a direct result of GlobeIn customers. With 58 employees, this means 8-9 employees produce GlobeIn products year round.

Read more about Le Souk Ceramique’s production process and top quality clay and see pictures of all their employees.

See the live process of the creation of the Malika ceramic line made exclusively for GlobeIn.